10 Things We Do To Help Our Son with ADHD

hey there!
I'm Ashley! A body positive mother, entrepreneur and speaker who has spent the last decade building better body love and empowering others to do the same.
How I Found Peace by Tuning in to True Body Love
13 interactive audio trainings, plus more!
tell me more

Hello! Thank you so much for hopping over to our little blog to get the details on how we help my beautiful son cope with his ADHD.

First of all, I AM NOT A DOCTOR. I am just sharing our experience in hopes to help you! There are a lot of reasons I have chosen not to address this online before, mostly out of respect for him because it’s his story to tell, however – he actually WANTS to talk about this- because he believes his ADHD is awesome and his superpower – and I do too!

We have had a few rough years trying to navigate this with him, but we really have found a sweet spot in the last year – nothing is perfect- but we are all doing MUCH better!

When I was talking to him about how we could share here, he was really excited about the chance to help others – so here we are! Sharing what works for us, well aware this may not work for everyone. 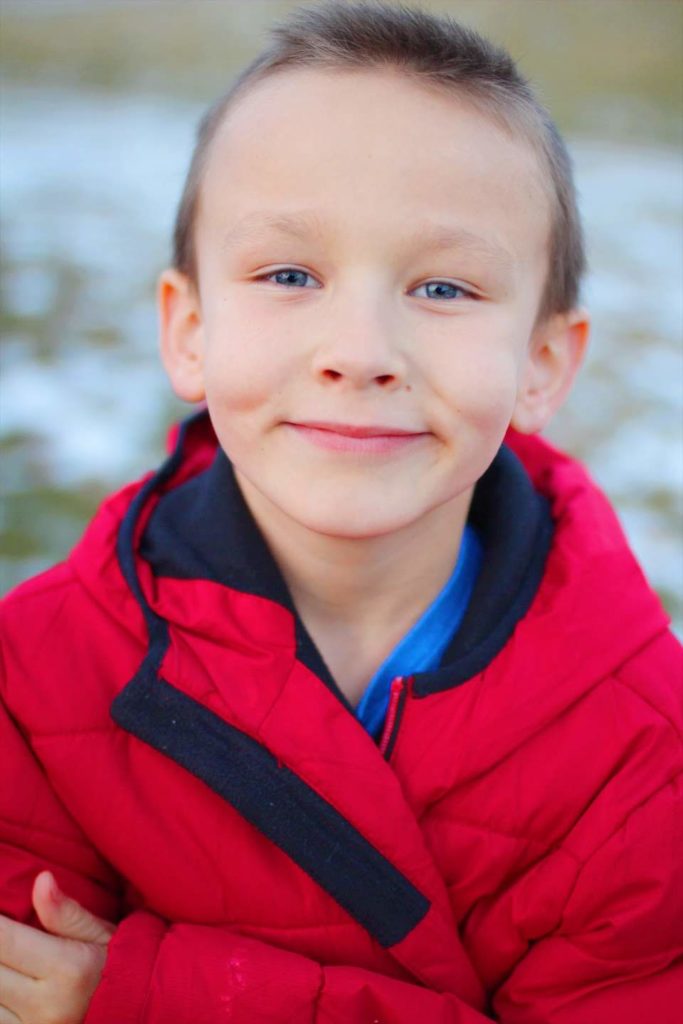 As a back story, Greyson was diagnosed when he was 4 years old. Some signs I saw when he was a toddler were his inability to sit still. Like literally he COULD NOT. We would watch a movie and he would be jumping up and down for 2 hours watching. He was fidgety constantly and had a hard time following step by step directions without getting sidetracked. He often ran off and had a hard time completing tasks, Greyson was always talking and making noise (which I loved, and a lot of other people gravitated to him because he was so friendly!) but it was a sign of ADHD.

After I took him into the Doctor, they had me fill out a lot of paperwork- they observed him and officially diagnosed him. I remember buckling him up in the car and calling my mom crying and she just said “Ashley, you already knew this! And you’ve already been handling it, and now you have some more answers.” She was right- I already had a hunch, it was just confirmed. There wasn’t anything to be sad about – we just now had definitions to help us, help Greyson. 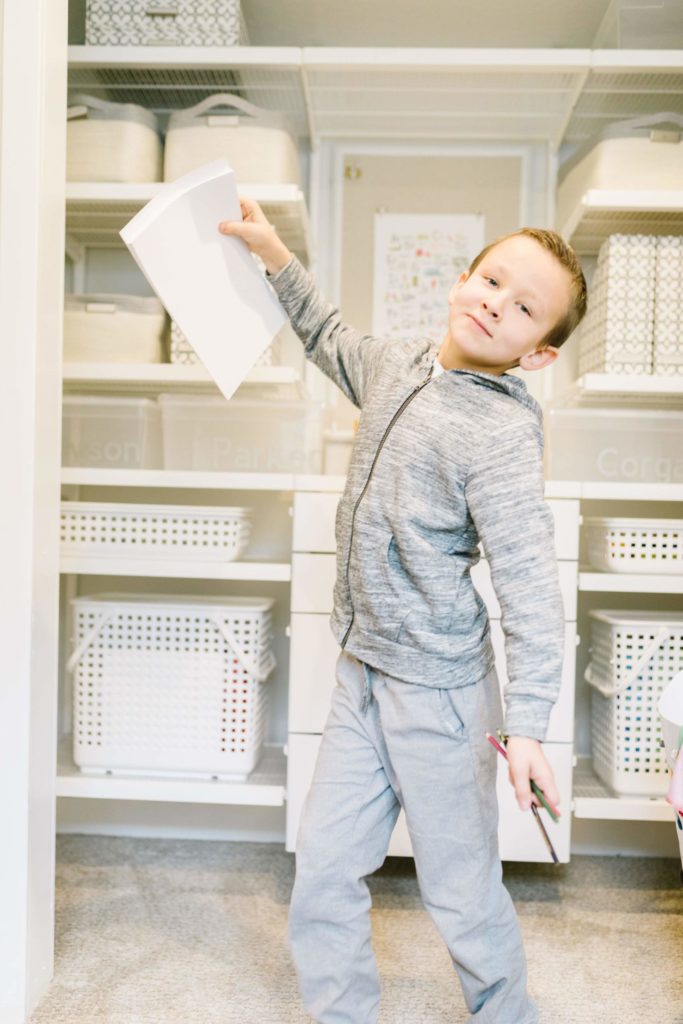 Because I know people will ask, Greyson is not currently medicated. We are not opposed, and we actually have tried 2 different times with medication but didn’t find it helpful. Right now we have a good plan in place that’s working, but we aren’t opposed to medication in the future if he needs it! I am grateful medication exists and I know it helps so many!
One thing that was a little different about Greyson, is he performs at the top of his class academically. A lot of ADHD kids are medicated because they struggle in school – but since that wasn’t one of his struggles, there wasn’t a huge need for medication at the time. I am well aware things could change at any minute, which is why I am totally open to anything! 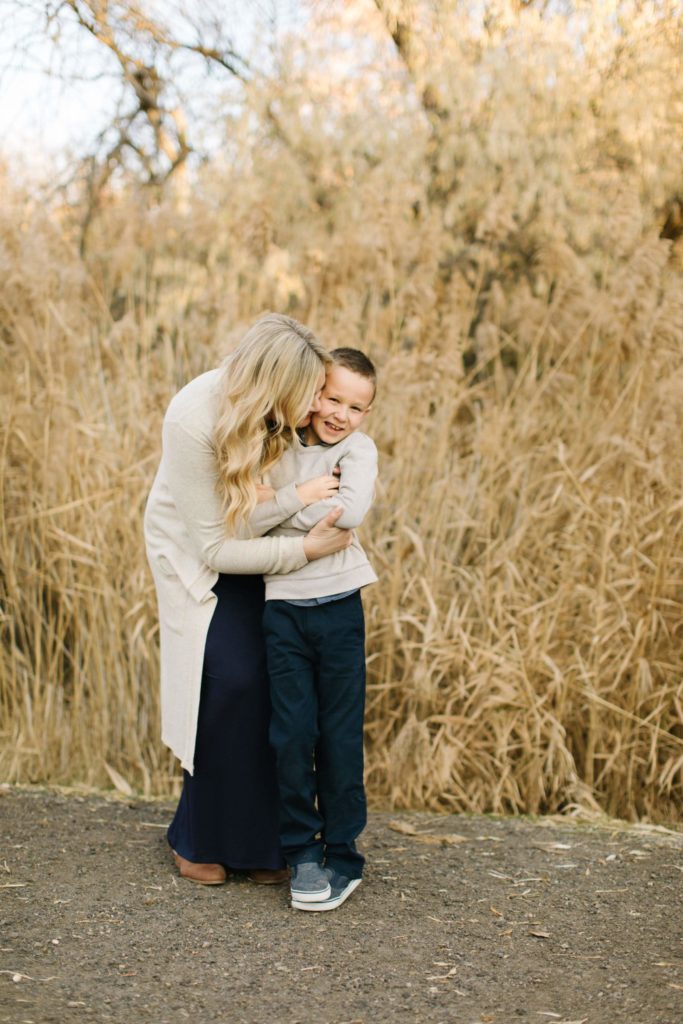 So lets chat about what’s working for us right now!

1 – OPEN TALK : One thing we decided to do was have pretty open discussions with him about ADHD. I wanted to avoid him feeling ‘labeled’ but instead I chose to have an open dialogue that would help him understand what was going on and why he was struggling more than some other kids his age. We talk about it, but we talk about how awesome it is. We call it his superpower! We still address the struggles, he’s aware its harder for him to focus but we love talking about all the benefits. One thing that was really fun for him, is we looked up famous people with ADHD and he loved reading names of people he loves, like Justin Timberlake and his favorite author Dav Pilkey.

2 – ROUTINE & EXPECTATIONS: Keeping our schedule, routine and expectations a high priority. We also make it visible so he can see that often during the day. I feel like this is so much more an effort on the parents part – to make a schedule and follow through with is so they can REALLY learn the routine and their expectations well without a ton of flip-flopping. We have a family calendar that shows each of our kids’ schedules and next to that is their chore chart.  Grey knows that he is expected to complete certain tasks every morning, afternoon and evening.  Doing this daily helps keep him organized and on task.

3 – LIMITING OVERSTIMULATION – and for Grey, this is usually screen time.  We have set boundaries where he can earn an hour of screen time at the end of each day if he meets all of his obligations.  For him, its usually 8pm-9pm and he isn’t allowed any other devices during the day, except for during that time- and only if he has earned it with completing all his chores and on good behavior. He loves this time he gets with his older brother, so having this as his reward keeps him motivated and has changed bad behaviors REAL quick when we mention him losing that time. That being said, TV I don’t count as screen time, his doctor told me TV doesn’t suck kids into meltdown mode like a handheld device does, so he watches shows sometimes during the day with his siblings!

4 – POSITIVE AFFIRMATIONS: We helped Greyson write up his own, and he says them in the morning – positive affirmations help his brain stay in a positive mindset! Greyson says “I am strong, I am smart, I am in control, I am calm, I am kind” and he adds a few depending on the day.

5 – BEHAVIOR THERAPY: Greyson meets once a week with a behavioral therapist for children, I googled to find a local on that accepted our insurance and we have loved working with one. Some sessions I am there for, sometimes its just Greyson solo- but weekly he is getting tips and help for living with ADHD and learning how to better manage situations for himself.

6 – ONE ON ONE TIME: Greyson needs a lot of extra attention, he will be the first to admit that 😉 I try to carve out about an hour a week just him with me or his Dad. Sometimes it’s just a trip to the grocery store- but it’s calm because the whole family isn’t around and I just talk to him about how he is doing. One thing about drives with ADHD kids, they are buckled in so have to hold still- sometimes it makes conversation a little easier! Another key here, is I ask him questions all about stuff I know he is interested in, this was in a book I read once that said we need to let kids lead conversations – so I ask him about what he likes to talk about, and it works! He feels like I value him and what he is interested in.

7- LIMIT SUGAR: The only way I limit is I don’t keep a ton in our house, but you guys probably know my feelings about raising kids as intuitive eaters- I don’t believe in doing a ton of restriction, BUT I have conversations with Greyson about “notice how when you ate a lot of sugar how it made you really hyper then crash? we probably shouldn’t do that too much so you feel strong and in control!”

8- PICK YOUR BATTLES: ADHD kids are being told allll day long by everyone, teachers, friends, parents, siblings to STOP. To be calm, to be quiet. They just get put down a lot, not even with an ill will- but I decided unless it was a big deal- I didn’t want to be one more person making him feel bad. So I have to let a lot go, or else I would be saying no all day long and causing more frustrations at home. So really think, is this thing happening worth the meltdown? Usually for us, it’s not. So I take a lot of deep breaths and let a lot go.

9- SO MUCH PRAISE: One of the best books I read on parenting kids with ADHD is called Taking charge of ADHD and it was so eye-opening for me! It brought to light how many negative interactions ADHD kids experience in a day and how important it was for them to get lots of praise for good behavior. It was a challenge for me initially, but basically, look at EVERYTHING they are doing and notice how many things they do right- and praise for it, lots! You put your shoes on!? THANK YOU FOR DOING THAT! You didn’t hit your brother when he bothered you?! THANK YOU FOR STAYING CALM! I noticed an immediate change in him, the more positive praise, the more he was seeking for praise and would behave better. I loved that book, and I love to praise.

10 – LEARNING HIS OWN CALMING STRATEGIES: Greyson is getting better at recognizing when he needs to cool down on his own, and sometimes he can take care of it completely on his own- there are still plenty of times I need to tell him to go calm down – here are a few things that work for him to calm down that he can do on his own. His ability to know what calms him has been huge for him, I will sometimes say “think of your calm place!” and it will help him chill out a bit! Here are some of his personal favs!

+Audiobooks that play through his audible on our Amazon Alexa dot

+Meditation – we used Head Space app for years, but it’s a little expensive, $12 a month! We recently started using Simply Sadie Jane’s Simply Mindful Kids Meditation tracks and have LOVED THEM, plus they’re only $25 one time.

+Oils: Greyson has a few oils we use – but we love Doterra oils always, I have used them for 8 years. The ones we use the most are CALMER (a kids blend) and BALANCE. This is a great kit for oils for kids HERE

+Drawing his own comic books. If Greyson has a pen and his blank notebooks and a quiet room, he will spend hours doing this. I love how creative he is, and it fully engages him. He uses these blank comic books from Amazon, I stock up every few months!

+Physical Activity: running + basketball seem to be awesome for Grey, when he gets the exercise he is so much calmer the rest of the day, he loves getting involved and its been a fun way for us to be supportive of him and cheer him on!

+Piano & Music: If you are noticing this is a long list – its because Greyson has a ton of interests! (a major perk of ADHD kids, they love a lot of stuff!) Greyson also loves music, singing, and piano and there is tons of research out there that proves rhythm helps focus, and it’s been awesome to help Greysons brain stay focused. I found a piano teacher that is a kid in high school that has helped him think it’s cool 😉 and he gets excited to go every week.

Alright, that’s a LOT of info! I hope it was helpful! I loved sharing a little bit about Greyson and why it is so special to us!

This is not a perfect system and we definitely don’t have everything figured out, but our days are so much better now than they were even last year!

Watch out IGTV live Grey and I did together HERE.

back to blog home

I'm a body positive mother, entrepreneur and speaker who has spent the last decade building better body love and empowering others to do the same.